THE MODEL SEEMS to be Arnau Salinas, wearing the same Turbo New Zealand water-polo suit that we have in wardrobe here at the Twinkz Illustrated Bulge Lab! The Lab also determined that his dick is pointed to the left and uncut. Unfortunately the photographer did not think to have his camera’s sensor cleaned. Look at all of the dust.

END_OF_DOCUMENT_TOKEN_TO_BE_REPLACED

ANOTHER WATER-POLO GOALIE posing for our cameras. That Nike water-polo suit thankfully does not have the hideous seam down the ass crack that the Nike swim brief has.

END_OF_DOCUMENT_TOKEN_TO_BE_REPLACED

SCORE: Twinkz Illustrated recruited a goalie for some photos the other day. Which was nice. Because we can always find water-polo players who want to surrender their bodies for photos in briefs. But not goalies. Understandable. They’re so tired from taking all of those shots from all of those other twink shooters trying to attack their boxes all day long — with all of those skip shots, lob shots, curve shots, screw shots, tee shots, wet shots, penalty shots. All of those shiny wet swimmers shooting at them with their cradle grips and three-finger releases and backspin rotations. God, they really make a goalie work to get his hands on the balls. Sometimes the only relief is an ejection foul. After all of the frenzy, you’d rather get head from a teammate than wrap your bulge in a water-polo brief for photographs. Except in this case. We have our ways.

This goalie’s team wears University Red Nike polyester water-polo briefs. Since there’s no lycra in them, his team’s suits also happen to feel slick and lubey when the players rub their bulges together. The king of slipperyness and lubeyness is nylon tricot, which Speedos used to be made of (lycra got added a few years ago and it was a show-stopper). This goalie is feeling the stimulus of nylon tricot against his suit in the second picture in the form of TYR nylon shorts.

There’s no place in the world that romanticizes and poeticizes nylon as well as the Nylon Speedo Authority’s site meninnylon.blogspot.com. Twinkz Illustrated of course erects the occasional nylon-related post and you can check the tag for it.

END_OF_DOCUMENT_TOKEN_TO_BE_REPLACED

Another post from our Chief Bulge Analyst here at the Department of Bulge Analytics! Hey, notice he’s kinda eyeing the goalie in front of him. If it’s a goalie’s job to get his hands on the balls, how is he missing the ones two feet away?! And below we’ve included another pic of this water-polo player from the Bulge Lab Library. Guaranteed you haven’t seen it floating around. We have some exclusive shit here at the Lab.

Bulge Lab Findings: Thick and uncut, of course. A handful, mouthful and assfull, depending on what you do with it. Also, this Turbo suit seems to be of an older style. The sides are wider than they are today. Turbo suits now have the narrowest cuts around for competition. If you want narrower, get a bikini or something else, but Team Bulge will not endorse that.

END_OF_DOCUMENT_TOKEN_TO_BE_REPLACED 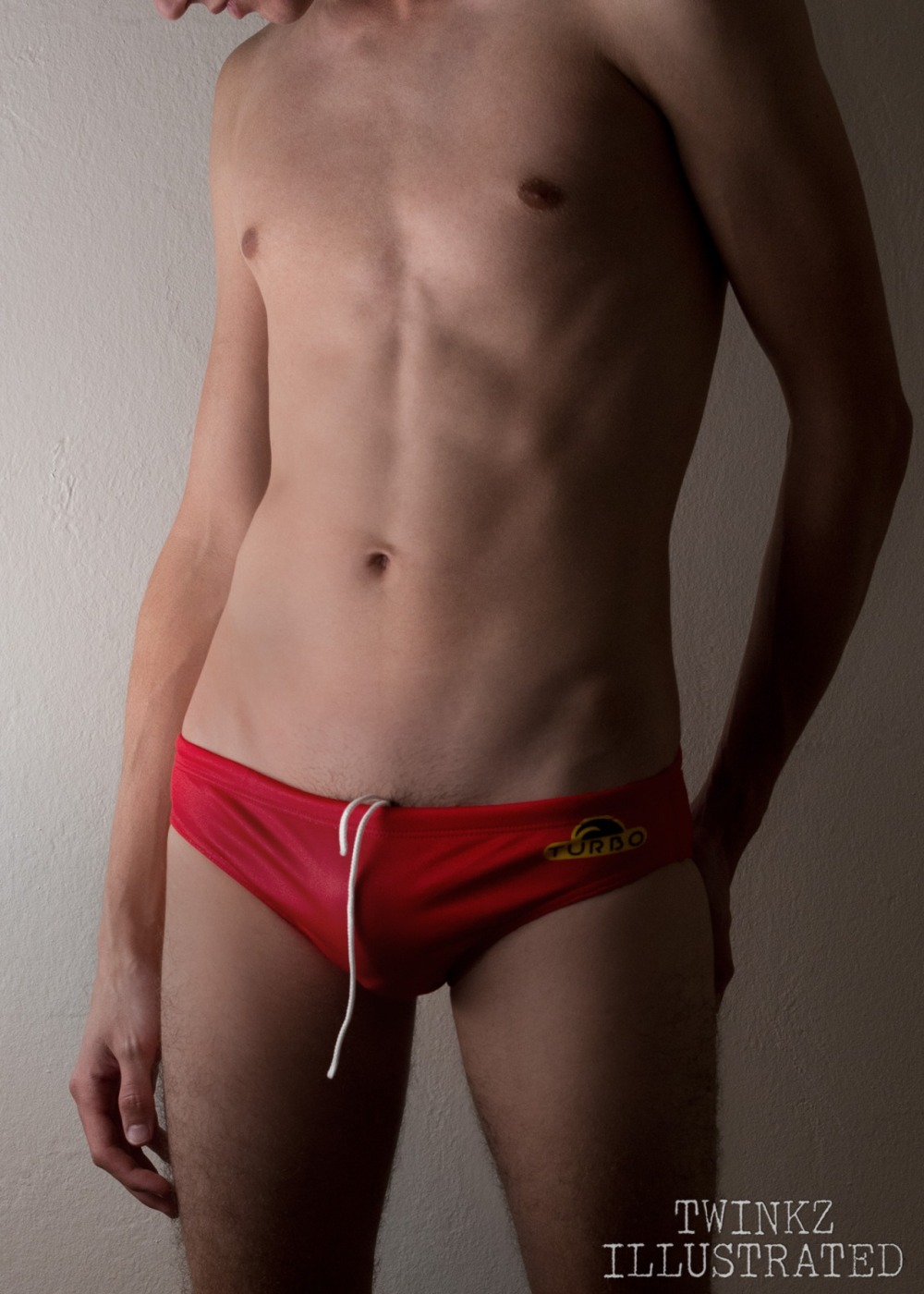 Our Bulge Analytics Department would reveal that this water-polo player’s dick is cut, a bit over 7″ and points downward when hard, just like it points downward in his suit when soft. Here it is clearly half hard, and you can see the suit nestling his head into the bottom of his sack.

Swimmers whose dicks point up when hard often point their dicks up in their suits so that their shiny wet chlorinated organs can inflate freely when they get hard at a meet or a water-polo match.

In any case there’s no need for Bulge Analytics to inform us what kind of dick is in this suit because you can see it right here!

Keep tabs on us at Twinkz-Illustrated.com
See the Speedos off at twinkz-deillustrated.tumblr.com

END_OF_DOCUMENT_TOKEN_TO_BE_REPLACED

Bulge Lab Findings: More of a grower in this suit, but cut, and hanging down and to the right a bit. That may be a black Turbo “basic” suit.

END_OF_DOCUMENT_TOKEN_TO_BE_REPLACED

Nudes of this water-polo player here and here. On the SPEEDOS-OFF site, he wears a 100% nylon TYR Destroyer water-polo brief. Which means he can rub bulges with another player wearing nylon and he’ll
squirt! Because nylon rubbing against nylon feels good and lycra
rubbing against lycra feels like you’re rubbing a tire on asphalt. Of course for this shot he’s wearing his team’s Speedo Avenger water-polo suit.

END_OF_DOCUMENT_TOKEN_TO_BE_REPLACED

Smooth, wet, tanned and twinky. His Daddy must be quite happy. Especially if he rubs bulges with him whilst wearing another nylon TruWest suit like this one. Of course it won’t be slick and lubey unless it’s dry — and if it’s dry enough to have fun with, conversely, it won’t be dry long! Did we mention this is a photo by Scott Stanford, who took lots of pics in the golden era of poolside photography, which featured tons of shiny wet dicks that got people mad at the photographers? Yep. More about him here.

(Some have pointed out that our Bulge Lab shouldn’t be lumping Scott Stanford and Allen into the same article with William and @sinalphoto and, more unrelated still, people who only scanned photos, like Johnie or Regis or whatnot. Well, the theme is that they’re all distributors of hot male content, so they’re all mentioned in the same piece!)

END_OF_DOCUMENT_TOKEN_TO_BE_REPLACED

Does he look nervous? He knows if he gets even just half hard, his dick is going to bust through the top of that Turbo suit. Again.

END_OF_DOCUMENT_TOKEN_TO_BE_REPLACED 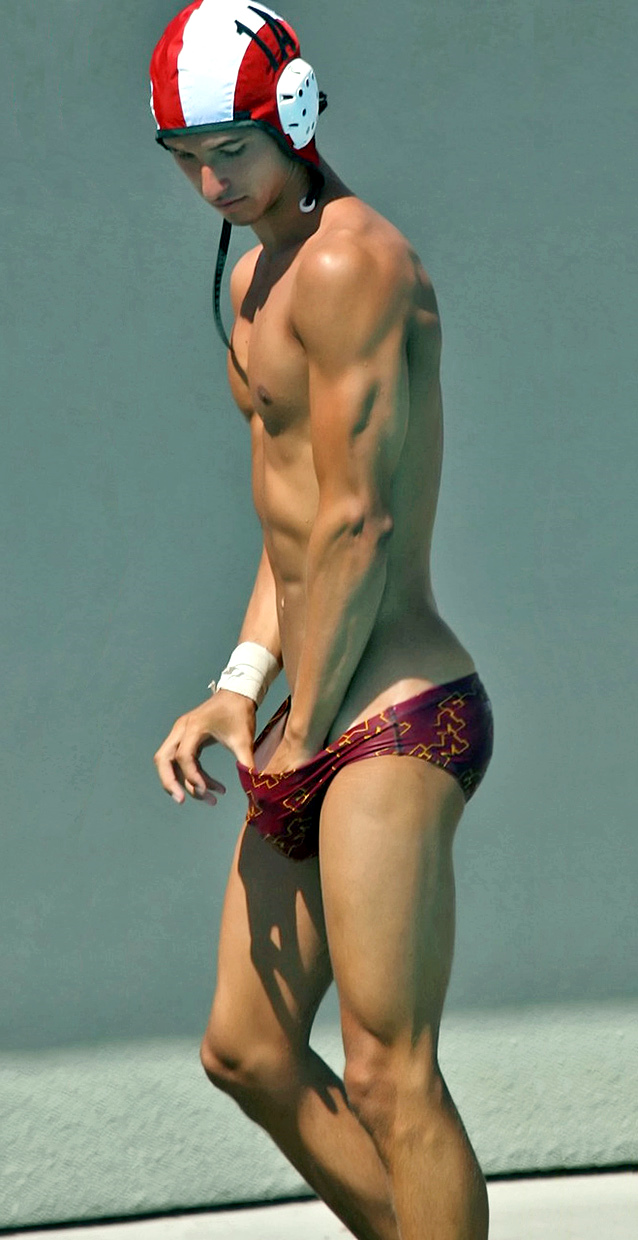 That’s a goalie! His job is to get his hands on the balls!

END_OF_DOCUMENT_TOKEN_TO_BE_REPLACED

My Daddy was hiking in the wilderness and found a model in a Turbo suit doing the same thing!

END_OF_DOCUMENT_TOKEN_TO_BE_REPLACED

It’s one of my Daddy’s models! SWIMSUIT ISSUE FOR TWINKS!

END_OF_DOCUMENT_TOKEN_TO_BE_REPLACED

Follow the other TWINKZ ILLUSTRATED blog too! I keep two blogs of my Daddy’s work!